In the latter part of the 18th century, Haut-Jura inhabitants had the idea of building fortified attics to prevent fire and robbery.

Indeed, at the time, farms were built in wood with large chimney and filled of hay. So in order to limit damages, it was decided to build an attic far from the living place to store the precious commodities, such as food for winter. This fortified attics were little houses, built in wood and covered of tavaillons with no window and provide with a thick double door.

Today, there still remains 190 of them in the southern Jura, mostly abandoned.

At Lajoux, you can visit one of those for free.

Keys and informations at the «Maison du Parc» at Lajoux.

Centre d'interprétation
LAJOUX
(Show on map)
The permanent exhibition "Haut-Jura, terre vivante” (Haut-Jura, a land full of life) allows you to travel through playful, colourful and interactive installations portraying each of the ...
Discover
Add to travel plan Remove from travel plan 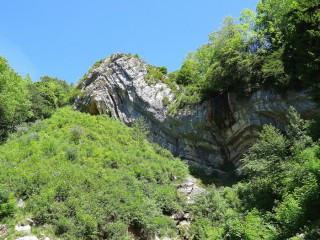 Your travel note is empty